Rule:
The Tag name is A for Apple
Give preference for regular sites
Ignore your own blogs, sites.
Tag 3 People.
Posted by முகுந்தன் at Friday, August 22, 2008 4 comments:

சென்னையில் இருக்கிறேன்..
will be back soon with an very important information for
all travellers regarding immigration and passport.
Posted by முகுந்தன் at Saturday, August 16, 2008 9 comments:

A villager had called an Englishman for lunch.
Seeing curd the guest asked how is it made?
Since he did not know proper English, He said,
"Milk sleeping in night, morning becomes tight."

The interviewing officer took back the pen and kept in his pocket and asked
Mr X where is the pen now?
Mr X replied antha pocket
Actually , he was answering him in tamil.

1. All men feel they are extremely busy.

2. Although they are so busy, they still have time for women.

3. Although they have time for women, they don't really care for them.

4. Although they don't really care for them, they always have one around.

6. Although they try their luck with others, they get really pissed off
if the woman leaves them.

7. Although the woman leaves them they still don't learn from their
mistakes and still try their luck with others.

1. The most important thing for a woman is financial security.

2. Although this is so important, they still go out and buy expensive
clothes and stuff.

3. Although they always buy expensive clothes, they never have something
to wear.

4. Although they never have something to wear, they always dress
beautifully.

5. Although they always dress beautifully, their clothes are always just
"an old rag".

6. Although their clothes are always "just an old rag", they still
expect you to compliment them.

7. Although they expect you to compliment them, when you do, they don't
believe you.
Posted by முகுந்தன் at Sunday, June 29, 2008 14 comments:

Wife: I Have Changed My Mind.
Husband: Thank God ! Does The New One Work Now?

Robber 2 bank clerk: Did u see me robbing?
Clerk: Yes.
Robber shot him dead & asked next clerk: Did u?
2nd clerk: No, But my wife saw u!

First Man: I got married coz I was tired of eating out,
cleaning the house n doing laundry.

Second: Amazing, I took divorce for the same reason!

Newly divorced woman explaining reason for splitting:
We had religious differences - he thought he was God, I didn't.

The math teacher saw that little Johnny wasn't
paying attention in class.
She called on him and asked,
"Pappu! What are 4, 2, 28 and 44?"
Little Johnny quickly replied,
"Cartoon Network, Ten Sports, Discovery Channel and Pogo!"

How to catch a squirrel?
Climb up a tree and just be yourself.
Squirrels will come to you on their own.
Because they just love NUTS :-)

Q: What's the diff between mother & wife?
A: One woman brings into the world crying and
the other ensures you continue to do so.

Dedicated to all boozers

A guy, sitting outside his home about to be evicted
from his house,was contemplating how the future
would be after he had divorced his wife,
lost his children and lost his job...

He notices a crate of beer bottles and walks up to it.

Arthur Ashe, the legendary Wimbledon player was dying of
AIDS which he got due to infected blood he received
during a heart surgery in 1983.

From world over, he received letters from his fans,
one of which conveyed:
"Why does GOD have to select you for such a bad disease"?

To this Arthur Ashe replied:
The world over -- 5 crore children start playing tennis,
50 lakh learn to play tennis, 5 lakh learn professional
tennis, 50,000 come to the circuit, 5000 reach the grand slam,
50 reach Wimbledon, 4 to semi final, 2 to the finals,
When I was holding a cup I never asked GOD
"Why me?". And today in pain I should not be asking GOD
"Why me?"

Happiness keeps u Sweet, Trials keep u Strong,
Sorrow keeps u Human,Failure Keeps u Humble,
Success keeps u Glowing,
But only God Keeps u Going.....
Posted by முகுந்தன் at Saturday, June 21, 2008 2 comments:

Teacher to Mr.X " Where were U born?
Mr.X : In Tiruvanantapuram.
Teacher : Spell it?
Mr.X : (after thinking) I think I was born in GOA.

Mr.X complained 2 Police : Sir all items are missing,
except the TV in my house.

Police : How the theif did not take TV???

If you call your mother as MUM.. What will you call Mother's
younger sis and elder sis?

Do you know the similarity between "Dinasaurs" & "Decent Girls"

When do you congratulate someone for their Mistake?

Whats the height of Intelligence?

Regular naps prevent old age... especially if you take them while driving.

Having one child makes you a parent; having two you are a referee.

Marriage is a relationship in which one person is always right and the other is husband !

I believe we should all pay our tax with a smile. I tried - but they wanted cash

Don't feel bad. A lot of people have no talent

Forgiveness is giving up my right to hate you for hurting me.

Bad officials are elected by good citizens who do not vote.

My wife and I always compromise. I admit I'm wrong and she agrees with me.

Those who can't laugh at themselves leave the job to others.
Posted by முகுந்தன் at Thursday, June 19, 2008 6 comments:

Do not take risk when you are drunk

I never take risk while drinking
When I come from office in the evening, wife is cooking
I can hear the noise of utensils in the kitchen
I stealthily enter the house
Take out the bottle from my black cupboard
Shivaji Maharaj is looking at me from the photo frame
But still no one is aware of it
Becoz I never take a risk
I take out the glass from the rack above the old sink
Quickly enjoy one peg
Wash the glass and again keep it on the rack
Of course I also keep the bottle inside my cupboard
Shivaji Maharaj is giving a smile
I peep into the kitchen
Wife is cutting potatoes
No one is aware of what I did
Becoz I never take a risk

I: Any news on chopra's daughter's marriage
Wife: Nope, she doesn't seem to be that lucky. Still they are looking out for her.

I again come out; there is a small noise of the black cupboard
But I don't make any sound while taking out the bottle
I take out the glass from the old rack above sink
Quickly enjoy one peg
Wash the bottle and keep it in the sink
Also keep the Black Glass in the cupboard
But still no one is aware of what I did
Becoz I never take a risk

I: (getting angry) you call Mr. chopra a horse?
If you say that again, I will cut your tongue...!
Wife: Don't just blabber something, go out and sit quietly...

I: (laughing) So chopra is marrying a horse!!
Wife: Hey go and sprinkle some water on your face...

I again go to the kitchen, and quietly sit on the rack
Stove is also on the rack
There is a small noise of bottles from the room outside
I peep and see that wife is enjoying a peg in the sink
But none of the horses are aware of what I did
Becoz Shivaji Maharaj never takes a risk
chopra is still cooking

And I am looking at my wife from the photo and laughing
Becoz I never take what???

Believe me , I never drink because I never want to take risk....

My full name is Kalaivani, but I call myself Kalai.
This is not for scene, ..like how Madhavan does in Anbe Sivam
(Anbarasu --> Ars). it has a looooong and pathetic history...

I started hearing different versions of my name after
coming out of India, and the painful fact is all the possible
permutations and combinations of vowels in
my name give meaningful words in tamil!!!

When I first joined the university, my professor wrote to me..

Dear KALAvani (meaning: thief; context: kalavani paya..)
..
.. ...
Sari
adhuvachum typo nu free ya vittudalam..
Then after a year, I joined a company for internship.
Those people called me before I joined, to inform me
about some test which I had to take..

I joined my full-time position in another company recently.
On my first day, we had a meeting..

Ennada, Chandramukhi la thalaivar 'durga' perai nakkaladikkira maathiri...
namma per ayiduche nu nenaikkum podhu... my friend came up
with a brilliant idea!
Adhavadhu... to compare my name with a word.so I started using
this word 'kaleidoscope'; which has the same pronunciation as 'kalai'!
So, I started telling everyone. 'Kalai as in kaleidoscope'!.
Ippo kooda romba ellam ozhunga solradhulla.
They are saying 'kalaai' (kalaaikiradhu)..
"Hey Kalaai!!"
"Yea?"
"Just trying to say your name. Ha ha ha"
"Ohhh..how sweet!" (thooo thEri..)

Yedho vaandhi edukkira effect la per irundhalum... my life was in peace...
until few days back...
My net connection was down, so I called up the customer service
(En kiragam. Madras call center ku pochu!)
Enakku andha vishayame theriyala. So I started in complete American accent...
"Your name ma'am?"
"Kalaai"
"What? Can you repeat ma'am?"
" Kalaai as in kaleidoscope"
"I didn't get that ma'am. Can I have your number? I can check the records" 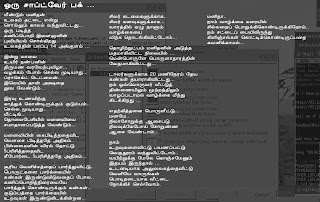